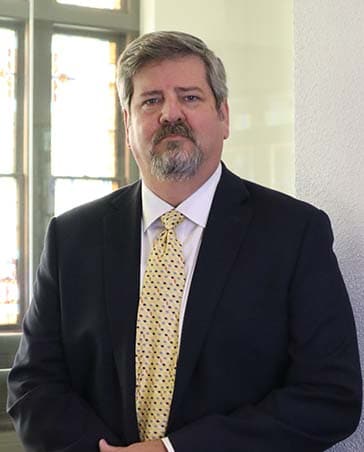 Roger B. Hale is a born and raised Oklahoman, but his activities as a Trial Lawyer takes him to hearings throughout the country.

After receiving his Law Degree from Oklahoma City University in April of 1990, Roger began his legal career working for a firm that handled Workers’ Compensation and Personal Injury on behalf of the injured individual. While with that Firm, Roger established a practice in Social Security Disability.

After practicing in the Ada, Oklahoma area for nearly 18 years, Roger decided it was time to return to Oklahoma City and join the Law Offices of Dan Davis. Roger’s practice involves representing individuals before State and Federal Courts when they have been injured due to the negligence of another. Roger also regularly tries cases before the Social Security Administration, the Veterans Administration, and the Oklahoma Workers’ Compensation Court.

Roger is the former Chairman of the Disability Section for the Oklahoma Bar Association and is licensed to practice before all Oklahoma State and Federal District Courts, the 10th Circuit Court of Appeals, the Social Security Administration, the Veterans Administration, and the Court of Appeals for Veteran Claims. Roger is also a member of the National Organization of Social Security Claimant’s Representatives (NOSSCR), the National Organization of Veteran Advocates (NOVA), the Oklahoma Bar Association, and the American Trial Lawyers Association.

When working as an injury attorney in Oklahoma City, Roger enjoys spending time with his wife and daughters. Roger also spends his free time hunting, fishing, and taking part in various shooting sports. Roger and his family are active supporters of Shriners Hospital and the Miss Amazing Organization.