For most drivers and passenger vehicle occupants, it is clear that running a red light is a dangerous and potentially deadly action.  Yet, whether as a result of inattention, distraction, or disregard, thousands of people run them every single day in the United States.

When drivers fail to obey traffic control devices, they aren’t just violating the law but they are risking forever altering the lives of those around them. As these drivers are speeding through the intersection, they put others at a much higher risk of sustaining significant injury than in other types of crashes.

Is this an issue pervasive in all of the nation or are there certain states or areas with a higher-than-average percentage of red-light crashes? Where are people killed most often as a result of a run red light?

With help from the data visualization agency 1Point21 Interactive, we analyzed all red-light fatal crashes between 1997 and 2019.  We looked at fatal crashes specifically as NHTSA FARS data is the only complete collision dataset available for the entire U.S.

We identified Red Light Crashes as that involved:

*Red-light runners may fall in more than one of the following categories. 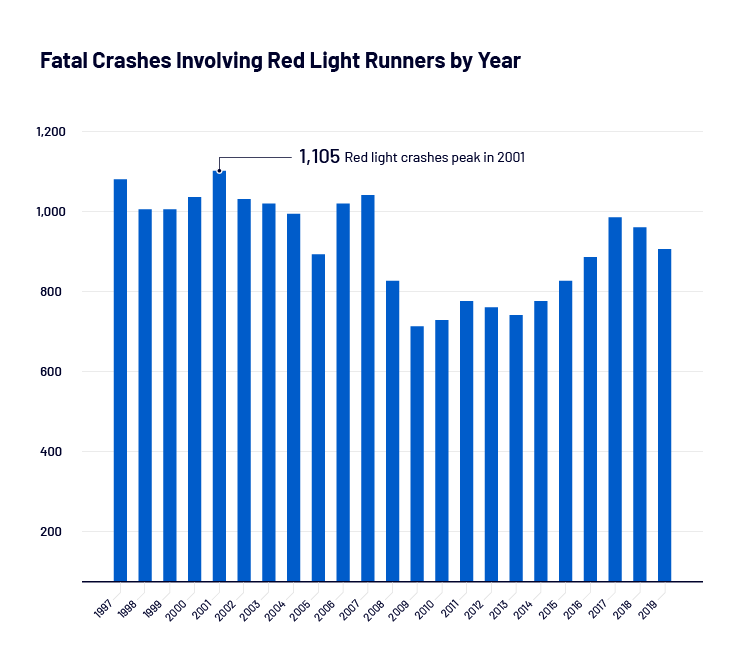 Where Do Red Light Crashes Occur?

The map below shows where in the U.S. red light crashes most commonly occur. The map is interactive and reveals additional information if you hover over any state.

*Rank is determined by the percentage of total fatal crashes that involved a run red light.  Ties were broken by count of red light crashes.

Who Is Involved in Red Light Crashes? 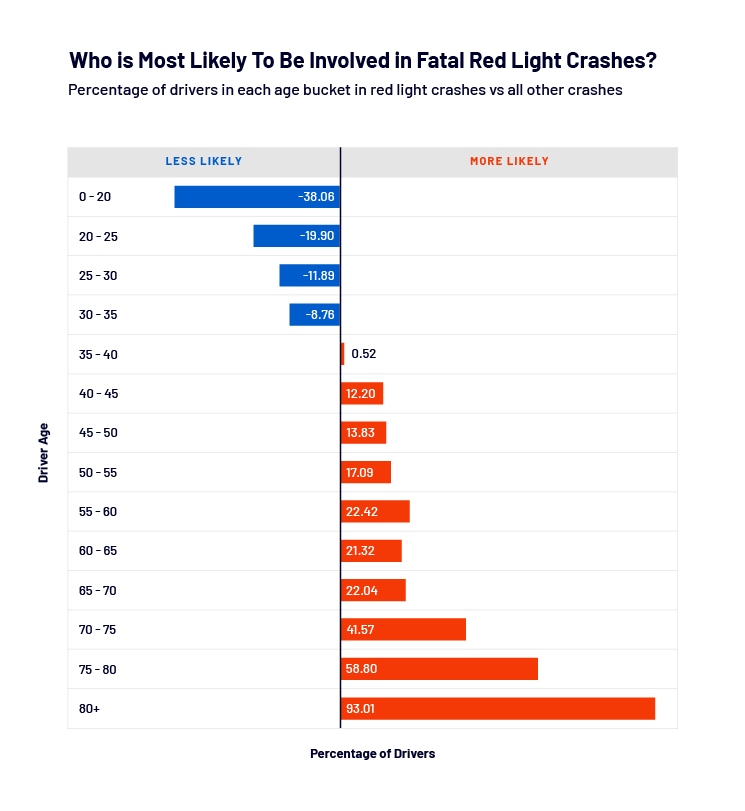 How Buzzed or Drunk Are Red Light Runners?

If blood alcohol testing was conducted, then the data was used in this study. If it was not provided, it was taken from statistically imputed estimates of BAC. Defining Terms:  Drunk: BAC over 0.08 Buzzed: BAC 0.01-0.08 Sober: BAC under 0.01 As seen earlier, the majority of red-light runners – 86 percent – were not intoxicated. Three percent of drivers were buzzed and ten percent were legally drunk when they blew through a red light.  Compared to other types of fatal crashes, half the number of drivers were legally drunk in red light crashes (20 percent vs. 10 percent, respectively).

When Do Red Light Crashes Most Likely Occur?

Crashes by Time of Day

At Dan Daivs Law, we see the irreparable consequences red-light crashes have on the residents of Oklahoma, and we believe the topic requires more attention. According to the National Highway Traffic Safety Administration (NHTSA), red-light running is a form of aggressive driving (defined as when “an individual commits a combination of moving traffic offenses so as to endanger other persons or property”).

Most of the time, drivers run red lights when they are in a hurry or the signal has just turned red and they have misjudged the timing. Red lights can feel like such a pain when we are in a rush to reach our destination, but remember that they are vital in maintaining the flow of traffic and keeping drivers, pedestrians, and cyclists safe on the road.  Practice the following tips to stay safer on the road:

Methodology and Fair Use

This study is based on 1975-2019 fatal crash data from the National Highway Traffic Safety Administration (NHTSA).  We filtered for crashes when there was:

If you would like to republish any of the data, images, or findings included, please provide credit by linking to this page.